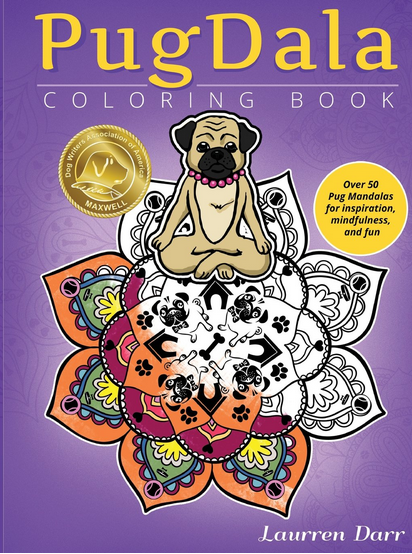 Left Paw Press is ecstatic to announce that lovers of its wildly popular mandala coloring books and pug books can now get a PugDala Coloring Book version that showcases the Maxwell Medallion that the book won in February 2017 for series of illustrations from the Dog Writers Association of America.

PugDala Coloring Book is available at online retailers and booksellers like Amazon: http://a.co/7V4ZrEB

People can gain clarity, focus, and peace by coloring mandalas. There are over fifty mandalas and mantras/affirmations included in each of the ‘Dala books. Mandalas are a form of therapy used by thousands worldwide. People seeking to calm their thoughts and increase their productivity, focus on coloring mandalas every day.

About Laurren Darr
Laurren Darr has been a plumb-pug-crazy, animal-loving, pet fashionologist and creative since childhood. She immerses herself in expression through writing and art. She’s found that including visionary habits in life is beneficial to health while feeding the soul. Darr is on a mission to unleash the human animal bond and connection through imaginative processes highlighting pets and empowering pet fashion professionals. Her book, Lipstick On A Pug, won the Maxwell Medallion from the Dog Writers Association of America in 2015 for Children’s Book of the Year. PugDala Coloring Book also won a Maxwell in 2016.